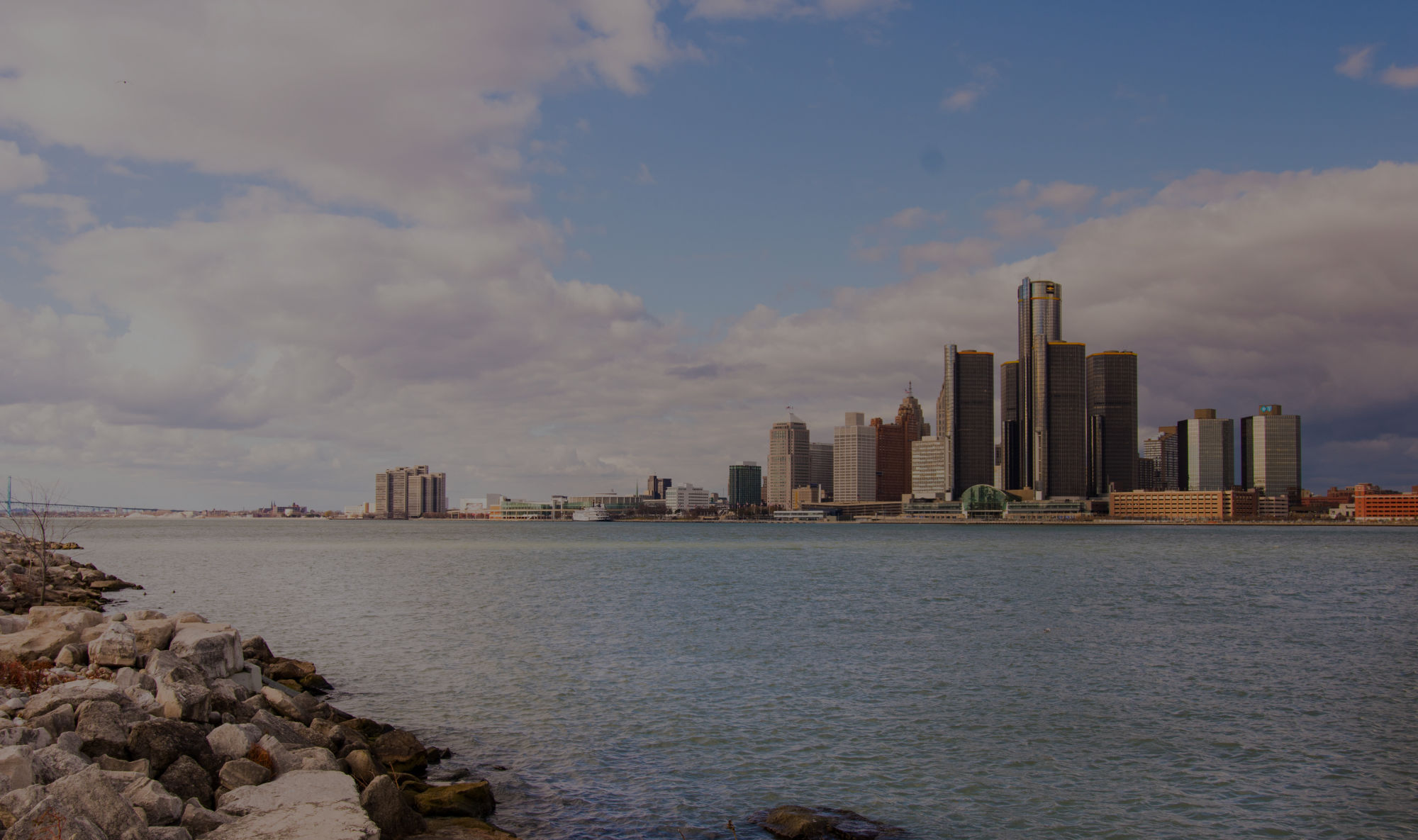 Detroit is a border city between the state of Michigan, U.S.A, and the Province of Ontario, Canada. It was founded in 1701, by Antoine Laumet de La Mothe, sieur de Cadillac on a strait that connects the Great Lakes system to the Saint Lawrence Seaway. With over five and half million residents, the Metro Detroit area holds almost half of Michigan’s population.

Detroit is most widely known as the one-time epicenter of the American automobile industry – hence the nickname: The Motor City. With the decline of that once very powerful economic engine, the city’s population and fortunes declined precipitously over the last few decades, and today, Detroit is searching for a new identity as a vibrant, 21st century American city with a strong economy.

Another thing that Detroit is well-known for, and has been for many years, is its music. In the 1940s, guitarist, singer, and songwriter, John Lee Hooker and other musicians like him, who had migrated from southern states like Mississippi, developed the Detroit blues, a distillation and expansion of the Delta blues. During the 1950s, the city’s Black Bottom neighborhood became a famous center for jazz, blues, and big bands. Renowned artists such as Duke Ellington, Billy Eckstine, Pearl Bailey, Ella Fitzgerald, and Count Basie regularly performed in the night clubs of the Paradise Valley entertainment district, while early R & B and doo-wop artists like Zeffrey “Andre” Williams and Nolan Strong recorded for Fortune Records, and American singer and actress, Della Reese, began her career as a gospel singer with Detroit’s Meditation Singers, one of the city’s female gospel groups of the era.

In 1955, Detroit-native, Bill Haley, ushered in the rock and roll era with the release of “Rock Around the Clock.” Other Rock and roll musicians and bands that rose to prominence during the ensuing years include: MC5, The Stooges, Bob Seger, the Amboy Dukes featuring Ted Nugent, Mitch Ryder and The Detroit Wheels, Rare Earth, Commander Cody and His Lost Planet Airmen, Grand Funk Railroad, Glenn Frey of The Eagles, and Alice Cooper. Pop singers Sonny Bono and Suzi Quatro also have called Detroit, home. Super-star, Madonna was raised in Rochester, Michigan, about 35 miles from the Motor City. 1990s pop star Aaliyah was raised in Detroit and graduated from the Detroit School of Arts.

The music of Detroit truly approached its greatest iteration in the 1960s and early ‘70s, after Berry Gordy Jr. founded Motown Records. In the 1960s, Motown and its subsidiary labels (including Tamla Motown, the brand used outside the US) were the most successful proponents of what came to be known as the Motown Sound, a style of soul music with a distinct pop influence. The list of stars who recorded at the company whose name defined an entire musical genre is long and impressive: Stevie Wonder, The Temptations, The Four Tops, Smokey Robinson & The Miracles, Diana Ross & The Supremes, the Jackson 5, Martha and the Vandellas, The Spinners, Gladys Knight & the Pips, The Marvelettes, Mary Wells, and Marvin Gaye, among others.

In the 1980s, the Detroit suburbs were the location of one of America’s first hardcore, pop, and post-hardcore punk scenes. Punk legend, Patti Smith was born in the city. Detroit is also home to hip-hop artists Eminem and Insane Clown Posse. The city also has an active garage rock scene, and is considered the birthplace of techno music and Detroit techno, a genre of electronic dance music. In the 1990s, the city also reverberated with the sounds of alternative rock.

In addition to many clubs, bars, and lounges, the metropolitan Detroit area boasts two of the top live music venues in the U.S. - the DTE Energy Music Theater and The Palace of Auburn Hills. The Music Hall Center for the Performing Arts is a 1,731-seat theatre located in the city's entertainment district. It was built in 1928 as the Wilson Theatre, designated a Michigan State Historic Site in 1976, and was listed on the National Register of Historic Places in 1977. The Detroit Symphony Orchestra’s main performance center is Orchestra Hall at the Max M. Fisher Music Center in Detroit's Midtown neighborhood. The Detroit Music Awards are held annually at The Fillmore Detroit in April. The building was listed on the National Register of Historic Places in 1982.

We love Detroit because there is so much music to be heard. And, at Bison Disc, we help to disseminate as much of that music as possible by duplicating and replicating the music CDs that are recorded by individual musicians, bands, and groups. We also help get that music to the listening public by packaging those CDs in sturdy and professionally designed and customized Jewel cases, Wallets, Jackets, Sleeves, and Digipaks.

Ever wonder how all those films get to all those film festivals? The fact is, many festivals rely on DVD and Blu-ray technology, rather than on traditional film projectors, in order to screen their offerings. At Bison Disc, we duplicate and replicate those DVD and Blu-ray discs that contain those pieces of film art and then we package them in customized Jewel cases, Wallets, Sleeves, Jackets, and Digipaks. And would you be surprised to know that artful and informative packaging of independent films helps in their presentation before festivals’ selection committees? We’re not. Because it’s what we do for our clients in the film community, every day – we help them get their films screened and seen.