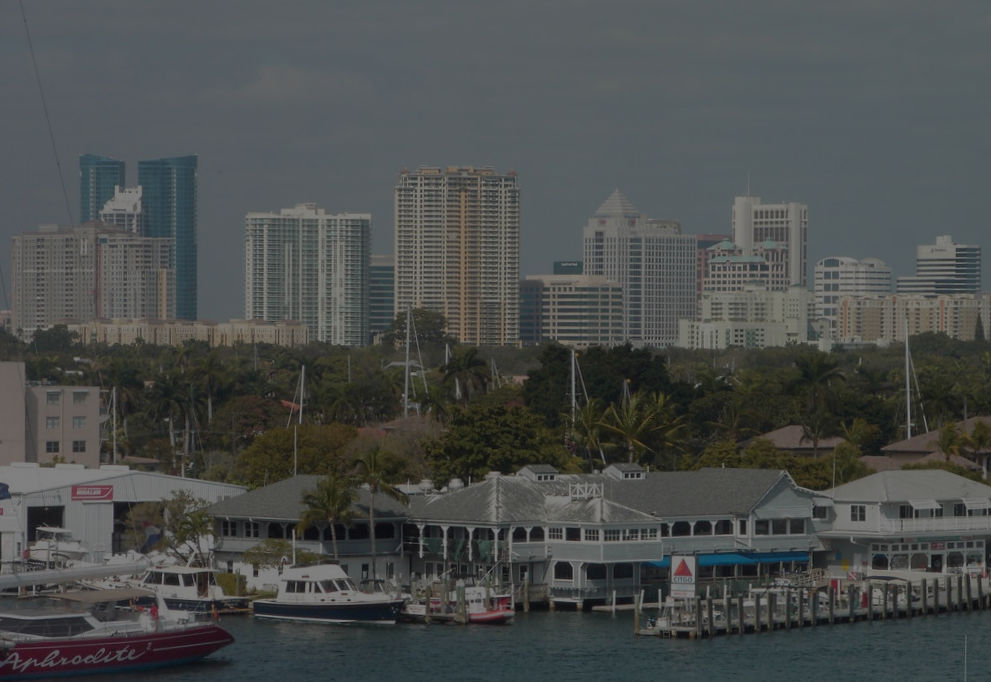 Fort Lauderdale, the Venice of America, is a city on Florida’s Atlantic coast, 23 miles north of Miami. It is a popular tourist destination, averaging over 12 million visitors a year, who are drawn by its warm climate, abundant sunshine, and sandy beaches. The Greater Fort Lauderdale area, which takes in all of Broward Country, has approximately 560 hotels and motels, comprising nearly 35,000 rooms. It has over 4,000 restaurants, 63 golf courses, 12 shopping malls, 16 museums, 132 nightclubs, 278 parkland campsites, and 100 marinas housing 45,000 resident yachts. Port Everglades, which is composed of land within three municipalities, Hollywood, Fort Lauderdale, and Dania Beach, is the departure point for 46 cruise ships.

Fort Lauderdale's arts and entertainment district, otherwise known as the Riverwalk Arts & Entertainment District, runs east-west along Las Olas Boulevard, from the beach to the heart of downtown. Formed in 1998 to promote cultural tourism to Fort Lauderdale, more than one million ticketed visitors annually attend programming at the combined Arts & Entertainment District partner venues, anchored by the Broward Center for the Performing Arts (BCPA).

Musical performance venues at the BCPA include the Au-Rene Theater, the main performance space for major international, national and regional productions, including the Miami City Ballet, the Concert Association of Florida, and the Florida Grand Opera, and the Amaturo Theater, an intimate space suitable for choirs, chamber music, jazz, folk, and symphonic music. Other performance venues in Ft. Lauderdale managed by the BCPA include the Parker Playhouse, and the Rose and Alfred Miniaci Performing Arts Center, located on the campus of Nova Southeastern University. In addition, for the past 18 years, the South Florida Symphony Orchestra has performed at the Josephine S. Leiser Opera Center.

(An interesting note about Ft. Lauderdale and classical music: Recently, Broward County Transit customers at the city’s Central Bus Terminal have been treated to classical music broadcast from the terminal’s PA system. Officials said they started piping in the music this past April to create a “pleasurable environment.” However, some commuters say it’s being used as a “vagrant repellent.” Just another sign that you can’t please everyone.)

Bison Disc is a company that serves the needs of musicians and musical groups by duplicating and replicating their music on CDs, which they can sell or distribute to their old fans and new admirers. We also package those CDs in attractive and affordable Jewel cases, Wallets, Sleeves, Jackets, and Digipaks complete with customized artwork and room for printed material. Several major studio films have been shot in Ft. Lauderdale over the years. Perhaps the most famous is the 1960 film, Where the Boys Are, which helped define the city as a college, spring-break mecca. Other films include: Happy Gilmore (2006), There's Something About Mary (1998), True Lies (1994), Any Given Sunday (1999), Out of Sight (1998), Donnie Brasco (1997), Cape Fear (1991), Caddyshack (1980), Midnight Cowboy (1969), Analyze This (1999), and Marley & Me (2008).

The Broward County Film Society was founded in 1986 to introduce independent cinema to a South Florida audience base of more than four and a half million people. Screened at the city’s Cinema Paradiso, it is considered one of the highest rated film festivals in Florida. The Fort Lauderdale Gay and Lesbian Film Festival is committed to its mission of enriching, entertaining and educating the public through the presentation of international and culturally diverse film, video, and other media that offer meaningful perspectives on the historic and/or contemporary gay, lesbian, bisexual and transgender experience. Films are screened at the Cinema Paradiso and the Ft. Lauderdale’s Classic Gateway Theatre.

As a lover of films and the people who make them, Bison Disc is committed to serving the needs of filmmakers from all walks of life. We duplicate and replicate their movies on DVD and Blu-ray discs. Then we package those discs for distribution in a wide variety of customized Jewel cases, Wallets, Jackets, Sleeves, and Digipaks. We also provide filmmakers the option of compiling their work in attractive box and collector sets.